Corrective Actions and the FRACAS process 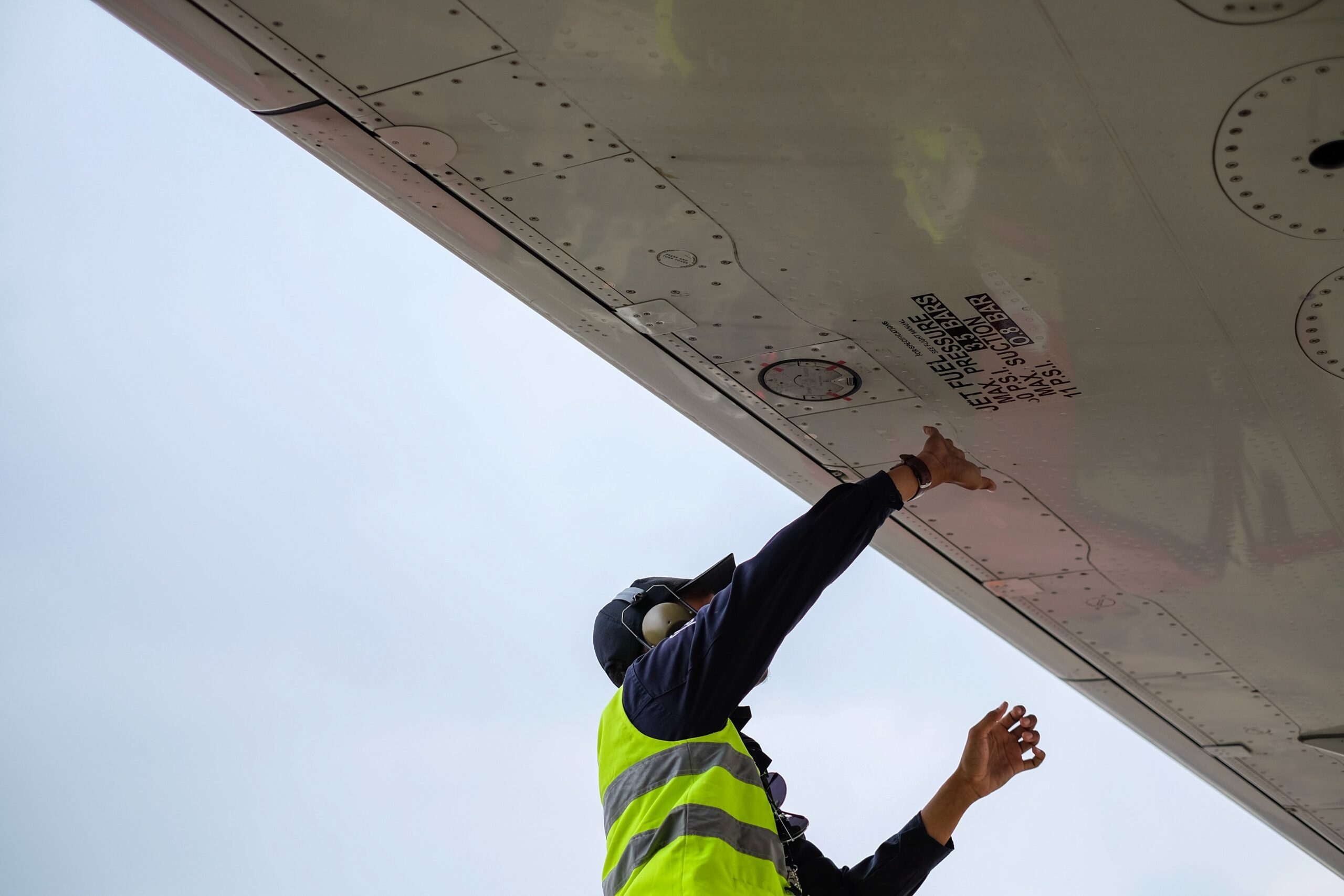 The first two steps; Failure Reporting and Analysis, provide the necessary data to the system. All the failures that required a maintenance action are analysed and stored in the system. Using said analysis, the real MTBF (Mean Time Between Failures) of each aircraft component can be obtained and compared to the values provided by the part manufacturer.

What are the Corrective Actions?

Corrective Actions, the focus of this article, consist of the measures taken by the aircraft manufacturer based on the collected data. Corrective Actions, which are normally abbreviated to “CAs”, are essential in order to meet the reliability goals of a product, be it an entire aircraft or an airborne system.

When and why should CAs be considered?

Usually, all products have a design MTBF, which is higher than the target MTBF. By analysing the failures that occur during the lifespan of the product, the real MTBF value is calculated. This number should be equal or higher than the target MTBF. However, failure analysis can show that the reliability of the product is underperforming compared to the design. FRACAS enables the manufacturer to track the component failures of the system, meaning that the real MTBF of a part can be compared to the GTBF (Guaranteed Time Between Failures) provided by the supplier. If the MTBF of a part is considerably lower than the GTBF, a corrective action should be considered.

Another reason to consider initiating a corrective action would be that a part is replaced too many times without finding any kind of failure. Also, if a part is consistently misused by the crew to the point of breaking down, a corrective action could be considered to address this issue. In these two cases, the component itself might not have failed, but it is still causing a disruption in the use of the system.

Who is responsible for the CAs?

Corrective actions are solely a responsibility of the manufacturer of the product. Component suppliers or product users have no say in the matter. However, their interests should always be considered, since they will be affected by the corrective actions undertaken by the company. In most organizations, corrective actions are carried out by a reliability review board. Although the FRACAS process is performed on a weekly or even daily basis, the review board meets up periodically, from a monthly to a yearly basis, unless there is a huge issue that requires immediate action.

How are CAs implemented and tracked?

Normally, the work of the review board starts with an initial meeting, during which the data obtained from FRACAS is analysed. Components with recurring failures or an MTBF lower than intended are considered for a corrective action. The review board looks into the problem and tries to figure out a solution. For example, the component might be misused by the crew of the aircraft, it may be subjected to too much tension, the maintenance process might be erroneous or the supplier may have provided faulty data. According to the findings of the board, a corrective action is agreed to, such as updating the maintenance process, issuing a service bulletin with a new required modification or changing the supplier of the component.

An example of how to add a new corrective action to the database using the FRACAS module of the Robin RAMS assistant can be seen below. It is required to specify the AC type and the reason of the CA, and it is recommended to also fill the affected part, its ATA chapter, priority of the CA and any comment the user might deem interesting. The CA can be closed right away, although this is not usually the case. The list of CAs and their status can be tracked on a table containing all the relevant data.

After the initial meeting, the review board performs a tracking of the performance of the affected component in order to establish if the corrective action has resulted in the intended outcome. Usually, this translates into an improvement of the MTBF of the part. To do this, a reliability assessment at the relevant level (fleet, AC, system, part) is to be performed. The results can be plotted over time and compared to the target. After the reliability target for the component is achieved, the review board closes the corrective action.

Seen above are the resulting graphs obtained using Robin FRACAS. This module provides the user with a very convenient tool that allows for the computation of reliability assessments in an intuitive way with the possibility of analysing different levels, establishing conditions and specifying a given timeframe. After this, plotting the resulting statistics and graphs is very easy and helpful at the same time with Robin. Returning to the graph above, it shows how the MTBF of the part was considerably smaller than the GTBF. However, after the corrective action was implemented at the initial CA meeting, the part reliability rose above the target level. Once this was deemed satisfactory, the CA was closed during the final CA meeting.

Common practices in the industry

On a final note, it is a common practice in the industry to subcontract part of the FRACAS process to companies specialized on reliability. However, the manufacturer should never give up the entire control over FRACAS to another company due to the importance and possible ramifications of FRACAS to the performance of the product.

Robin RAMS as a tool for FRACAS

Developed by DMD Solutions, Robin is a RAMS assistant tool that has been designed by aerospace engineers to support RAMS analyses. Relevant to this article is the FRACAS module of Robin, on of five offered by this tool. Robin FRACAS facilitates the collection, process, and analysis of failure reports and corrective actions in an effective and intuitive way. 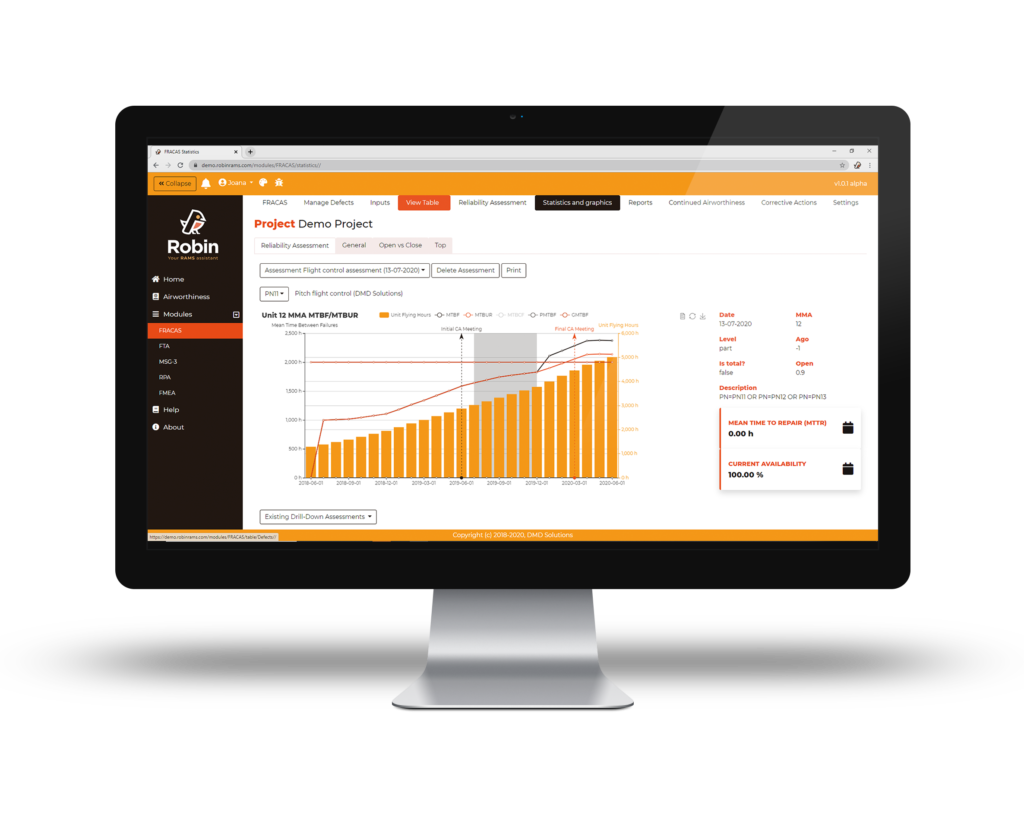 Robin provides the user with full FRACAS capabilities, allowing them to manage the failure reports of a system or aircraft through a user-friendly platform. All data is integrated in a safe repository with secure management. Smart charts as the one seen above and integrated analysis for reliability parameters such as the MTBF can be obtained with Robin FRACAS. Moreover, Robin provides the user with an outstanding flexibility, allowing them to comfortably manage their data by facilitating data import and export.

The most straightforward RAMS tool in the market for aerospace certification

Trustpilot
We use cookies on our website to give you the most relevant experience by remembering your preferences and repeat visits. By clicking “Accept All”, you consent to the use of ALL the cookies. However, you may visit "Cookie Settings" to provide a controlled consent.
Cookie SettingsAccept All
Manage consent

This website uses cookies to improve your experience while you navigate through the website. Out of these, the cookies that are categorized as necessary are stored on your browser as they are essential for the working of basic functionalities of the website. We also use third-party cookies that help us analyze and understand how you use this website. These cookies will be stored in your browser only with your consent. You also have the option to opt-out of these cookies. But opting out of some of these cookies may affect your browsing experience.
Necessary Always Enabled
Necessary cookies are absolutely essential for the website to function properly. These cookies ensure basic functionalities and security features of the website, anonymously.
Functional
Functional cookies help to perform certain functionalities like sharing the content of the website on social media platforms, collect feedbacks, and other third-party features.
Performance
Performance cookies are used to understand and analyze the key performance indexes of the website which helps in delivering a better user experience for the visitors.
Analytics
Analytical cookies are used to understand how visitors interact with the website. These cookies help provide information on metrics the number of visitors, bounce rate, traffic source, etc.
Advertisement
Advertisement cookies are used to provide visitors with relevant ads and marketing campaigns. These cookies track visitors across websites and collect information to provide customized ads.
Others
Other uncategorized cookies are those that are being analyzed and have not been classified into a category as yet.
SAVE & ACCEPT
Powered by